IMG is currently implementing the Project “Development of a Legal Information Service, (LawData System) for the Kosovo Assembly and the Language Consistency of the Laws” on behalf of the Assembly of Kosovo. The Project is financed by the Norwegian Ministry of Foreign Affairs represented by the Royal Norwegian Embassy in Pristina.

The key idea of this initiative is to increase the general public's access to justice by eliminating doubts about what legal provisions are in force. This will be done by structuring text of the legal documents (laws and by-laws) and by consolidating all their subsequent amendments into a single text. Subject to the structuring and consolidation, will be all laws and by- laws enacted from February 2008 onwards.

Project commenced on September 1, 2019 with 32 months duration until 30 April 2022. The Project has two Components, the“Development of a Legal Information Service” as Component 1 implemented by IMG and the Language Consistency of the Laws as Component 2 which is being implemented by ECMI. The implementation period is divided in three distinctphases, andongoing currently is the implementation of the Main Phase (the Second Phase) the development of the LawData system, population of the System with data and to identify the language inconsistencies in the laws and by-laws.

The overall responsibility for the implementation of the Project lies with IMG as per agreement with the Assembly of Kosovo.

The overall objective of the project is to strengthen and promote transparency and efficiency of the Assembly in Kosovo and other State Institutions within the Rule of Law with a significant impact on the legal sector of Kosovo.

Through the Component 1, the Project’s specific objective is to develop and deploy a “Law- Data System” with populated data in a structured manner and consolidated format of all the laws and by-laws enacted since February 2008.  TheSystemwillextendthe structuretocreateahyperlinkedinformationbaseofarticles,versions,etc.The information will be the current (updated) version of all the content that isin effectofacertainact, this waypreventing the readers in using obsolete rules.

In addition, the System will have the possibility to keep track of all official references made to a specific Law by the state institution during their daily work, ensuring better oversight of the used Laws. In a simpler look, this way the legal acts are easier to understand and consequently the citizens know better their duties and rights which they are expected to comply. Therefore, by having a consolidated legislation populated into a user-friendly ICT tool, we manage to ensure a clearer structure of the legislation and improve accessibility for the readers.  Moreover, the Law-Data System provides a good foundation for the stakeholders (Kosovo Institutions) to electronically exchange and cooperatively use data by integrating with their own systems the data structure of the legal acts contained in the Law-Data System. This will assist the process of interoperability among the Kosovo institutions in the field of Rule of Law.

The specific objective of the 2nd Component is to address the discrepancies between the different anguage versions of the laws and by-laws; as well as to find a sustainable solution in avoiding such inconsistencies in the future. 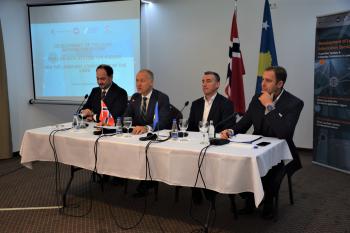